Hops, What Are They, And How Do We Use Them in Beer? Part 1

Hops, What Are They, And How Do We Use Them in Beer? Part 1

Hops are amazing and maybe a little mysterious. Everyone knows they are a part of beer but what exactly are they and how do they work so well in beer? We break it down in this week's episode of BrewTalk with Mr. Beer.

First, let us talk about what hops are. Hops are the flowers of the Humulus lupulus plant, otherwise known as the “hop plant”. It comes from the relatively small botanical family known as Cannabaceae. Hops have been used for centuries as medicinal herbs but most of us are familiar with them through their use in beer. Hops harvested for purposes like brewing come from the female plant.

These days the primary function of hops in beer is as a bittering and flavoring component. There’s evidence that hops began being used in beer this way away around 800 A.D., but their cultivation for usage by humans going back before 1,000 BC. In the days of old, hops were as much of a flavor component as they were a functional one. Besides imparting those characteristic citrus and herb flavors, hops also impart preservative and anti-fungal properties.

As we mentioned earlier, we primarily use hops in brewing for their flavor and bitterness contributions. Thanks to the mass production of a variety of hop pellets, professional and homebrewers alike, can create a multitude of hop-centric brews, easily! There is even a growing list of vendors to fill the demand for fresh hops, requested by homebrewers.

So, what is in a hop that makes it tick? Well if you have spent any time on the internet researching hops, you have probably stumbled on the words “Humulone” and “alpha acids”, right? Well, to start, Humulones ARE alpha acids. Alpha acids, when it comes to brewing, are one of the more important chemical components found in hops. You may have noticed when purchasing hops that the labeling includes an “AA percentage” (Alpha acid), this directly correlates to the bittering potential of that particular hop varietal, since the Alpha acid, humulone, is what becomes bitter when it is exposed to heat in the boil. Humulone that has been exposed to heat so that it becomes bitter, is known as “Iso-humulone” or “Iso alpha acids” because it has undergone the transformative process known as, “Isomerization.”

Knowing the alpha acid percentage of a particular hop aids the brewer in hop selection that is appropriate for the specific flavor build. For example, a brewer may be building a recipe for a crispy and refreshing German lager, where a lower to moderate bitterness and hop aroma is desired, it would make sense in this instance, that the brewer would select a hop variety with a slightly lower bittering potential. Inversely, if your plan is to produce a bitter and hoppy IPA, you would likely select a hop variety that offers a higher percentage of alpha acids and therefore a higher bittering potential. Of course, a brewer may select a hop of a higher alpha acid variety for shorter boil times, to speed up production or for other reasons, which we will discuss later in this episode. The Alpha acids in hops also make them highly resistant to gram-positive bacteria, which is one of the attributes that originally made them popular, way-back-when. Humulone is found most abundantly in the glands of the hop flower known as the Lupulin glands. Commercial hop extracts are made from the contents of these glands. Many craft beers also boast using “lupulin wet hops” in order to impart as much fresh hop flavor into a beer as possible. 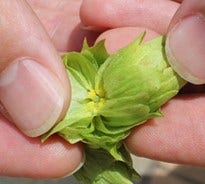 The next notable group of compounds found in hops is the “Beta acids”, otherwise broadly known as lupulones.

Not only do these Beta acids contribute some flavor properties, but Lupulones also play a big role in the bacteriostatic nature of hops. The lupulones aromas in a hop are most apparent during the earlier and more active stages of fermentation. Unfortunately, because Lupulones are so Volatile, while you are catching lovely whiffs of them during fermentation, they are also escaping into the atmosphere. Beta acids, unlike alpha acids, do not require any heat for their extraction. Notable Beta acids found within hops include Lupulone, Colupulone, and Adlupulone. Beta acids are not known for their bitterness contribution, however, because Beta acids are initially insoluble, they can end up isomerizing over time in instances of extended aging and that can contribute to an unpleasant and cloying bitterness. Because Beta acids often do not become consequential, until much further down the road, many homebrewers do not think about them, but if flavor stability over time is important to you, paying attention to the Beta Acid percentages in your hops can be a good idea.

Next, we come to the characteristic of hops that hits us first when giving them a good smell, the essential oils. Essential oils, also known as “terpenes,” are important because they provide all those great flavors and aroma qualities, we associate with hop-centric brews. Essential oils are responsible for most of those words you hear like “Grassy”, “piney”, “citrusy”, “earthy”, etc. They are also extremely volatile and sensitive to destruction through overexposure to heat, oxygen, and UV light. This is one of the primary reasons why a brewer will choose to add hops for their aroma contributions either late in the boil or as “dry hop” additions during fermentation. We will talk about how to make that work for you, in part two of this installment.

You could easily justify saying that “essential oils from hops, give beer much of its character”, and you would not be wrong. So, given their importance, let’s give a little more attention to those Essential oils.

There are up to 250 different types of essential oils within the hop plant, but some of them are more abundant than others and a portion of them do not offer any flavor contributions that we have discovered thus far. The most typically abundant essential oil found within hops is Humulene- Most of the flavor and aroma from this oil is most abundant when hops are added late in the boil, or through dry hopping because it degrades relatively rapidly. This chemical is generally very abundant in noble hops. Noble hops are varieties of high aroma (high levels of humulene) and lower in bitterness (low alpha acid). Some of the German Noble hops would include Tettenanger, Spalt, Hallertauer and Saaz, there also many modern blends, and variations of these hops available. Humulene’s aroma character is generally described as subtly earthy, musky, or herby.

Myrcene, is another common EO found in hops, perhaps most abundantly in North American varieties. When added to late boil or even after, myrcene creates a characteristic citrus and pine aroma in beer. Varieties high in this are used in many heavily hopped, North American beers. Although this chemical also degrades quickly it is not quite as volatile as some of the others. Maintaining the integrity of those bright, Myrcene oils is one of the reasons it is always advised to drink Hop-centric beers, as fresh as possible.

Some examples of hops that are high in Myrcene are Simcoe, Amarillo, Citra, and Northern Brewer, just to name a few. Bay leaves are also high in Myrcene, which explains why some individuals are reminded of Bay when they smell certain varieties of hops.

Less abundant, but still important we have an essential oil called Caryophyllene, which contributes a “spicy” flavor, similar to humulene. You can find high levels of this Essential oil in cloves, as well. Vanguard and East Kent Goldings hops often contain perceptible levels of this Terpene.

The last essential oil we will cover is called Farensene and is not known to add much aroma or flavor to beer because of how incredibly volatile and hydrophobic it is, but it is usually woody in the aroma. It commonly makes up a small percentage of the oils in the hop, but some varieties contain higher amounts. Unfortunately, after boiling and fermentation, this Essential oil is nearly non-existent in the finished beer.

More and more, new hop varieties are being created to enhance all the different flavors and characteristics that are possible within a hop cone. Where 15 years ago, only limited varieties of hops were widely available to home brewers, especially, it is now possible to obtain hops that fit nearly any set of nuanced flavor guidelines that one could think of.

It REALLY helps to know what kind of flavors a specific hop type contributes when deciding how to design a beer around it. Understanding your ingredients is one of the most powerful tools for success in your brewing arsenal.