Mr.Beer in the News
Comments: 0

John Chandler is an inspiring story.

So inspirational, in fact, that Mr. Beer took notice.

Sir Kenneth is now available as a homebrew recipe for a limited time for $29.99.

"We wanted to do something to recognize what [Chandler] overcame to start his brewery," said Pat Bridges, vice president of sales and marketing for Mr. Beer, which bills itself as the "world's No. 1 home brewing powerhouse."

Chandler's story has been well-chronicled. He dreamed of opening his own brewery one day and right as his dream was being fulfilled, he was diagnosed with adenocarcinoma, a fast-growing tumor in his sinus cavity.

He had to endure a successful 15-hour surgery last year at the Cleveland Clinic — a procedure that cost him his right eye and compromised his senses of smell and taste. Despite the setback, Paladin, which features a medieval theme, opened in August.

"I'm not going to hang up my hat because of a little cancer," Chandler said at the time.

After learning about the story — which included the fact that Chandler first started out with a Mr. Beer kit — Mr. Beer contacted him about the collaboration.

The company has done similar partnerships before, but Sir Kenneth is Mr. Beer's first recipe that employs a partial mash.

"We like to take good beer recipes that are only available in a small part of the country and make those available to homebrewers all across the country," Bridges said.

He said Mr. Beer loved Chandler's persistence and how his family and community rallied around him.

The company held a special kick-off event for the homebrew version of Sir Kenneth earlier this month at the brewery and donated $1 for every pint sold to help with Chandler's medical expenses.

Paladin also held a blind taste test to see if people could tell the difference between the Sir Kenneth made on the professional 15-barrel brewing system and the Mr. Beer homebrew version. Only about half the people could, said Abby Chandler, John's wife.

Sir Kenneth, which clocks in at less than 5 percent alcohol by volume and employs hops traditionally used in a Bohemian pilsner, is the top-selling beer at Paladin. It's named after Abby Chandler's 91-year-old grandfather, Ken Erdner.

As for John Chandler's health, his wife said that he's doing well. He's still regaining his strength and his sense of taste is returning. He also will undergo a cosmetic procedure soon for a prosthetic eye.

The brewery and tasting room also are going strong. Paladin now offers nine beers and can now be found at 17 different bars and restaurants in the Austintown area.

0 Comment(s)
Recent Posts
How to tell if your beer is done fermenting?

Beef and Beer Slow Cooker Stew
When is the earliest you can bottle your beer?
First Time Brewer FAQs 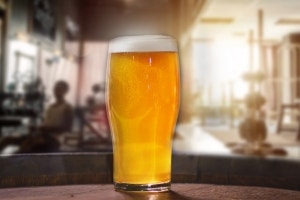 How to Brew a Low Carb Beer?
Categories